Northern small businesses are suffering much more aggressive cuts in their bank overdrafts than those based in London, according to research by Funding Options, the online business finance supermarket.

Research commissioned by Funding Options shows that 55% of small businesses in the North have seen their overdrafts reduced or withdrawn entirely in the past two years alone, compared to just 25% of London SMEs*.

It says that although the bias against northern businesses has receded over the years, these figures show that it still may be lingering.

Funding Options adds that the figures demonstrate that the £5 million per day that banks have cut from SME overdrafts every day over the last four years has not been uniform across the UK, with the Government’s Northern Powerhouse bearing the brunt of banks’ retreat from provision of working capital finance to small businesses.

Funding Options, based in Manchester, says that sharp reductions in working capital through overdraft cuts are the ‘hidden credit crunch’ affecting Britain’s small businesses, and that the North has been disproportionately affected. 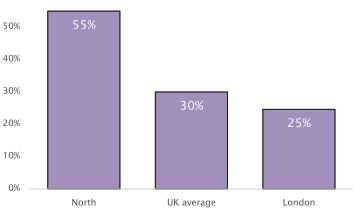 It adds that the withdrawal of overdrafts is one of the biggest drivers of the increasing use of alternative finance, such as invoice finance, asset finance, bridging loans and peer-to-peer lending.

Reductions in small business overdrafts are cutting off the fuel for the Northern Powerhouse.

The ongoing reductions in overdrafts for small businesses is the hidden credit crunch, and while the whole country has been affected, the North has been hit a lot harder than London.

As the banks have been forced to reduce their exposure to small business lending, they have focused on overdrafts as a risk that can be eliminated with relative ease, and at short notice.

We’re now approaching the end of the business overdraft as a tool for working capital.

* Based on a survey of 250 small business owners